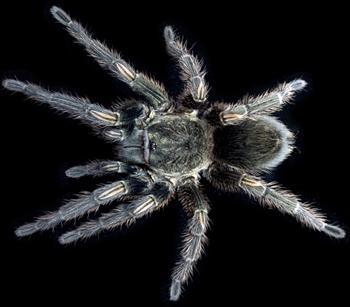 An estimated 8 million people suffer from moderate to severe chronic pain in the UK (Fayaz et al., 2016). Although it may arise from an initial injury or an on-going illness, chronic pain can also occur when feedback mechanisms in your brain malfunction, leaving sufferers to feel constant pain, at times for no apparent cause. Treatments frequently leave patients feeling tired, lead to addiction, or are even ineffective.

Scientists at the University of Queensland are investigating whether spider venom can be used as a cure for chronic pain. Venom is used to paralyse prey and interfere with their ability to control their body, making it likely to contain toxins that may disrupt neural activity in the brain.

The team first tested a variety of spider toxins to identify if any had painkiller effects in humans. The ProTx-II peptide, isolated from the fangs of the Peruvian green velvet tarantula, was found to reduce activity in the Nav1.7 channel pathway particularly important in chronic pain. Previously, studies have revealed that individuals lacking the Nav1.7 channel due to a genetic mutation are unable to experience pain (known as ‘congenital analgesia’) (Cox et al., 2006). Therefore, blocking this channel could be a potential avenue for treating people with normal pain pathways.

Using biophysical techniques to study the 3D structure of the proTx-II peptide, the researchers showed that the toxin specifically interacts with and inhibits the function of the Nav1.7 channel, which is mostly found in pain-sensing nerves in the dorsal root ganglion (a small bundle of nerve cells involved in bringing sensory information from the rest of the body to the spinal cord). They went on to explain that the cell membrane of nerve cells plays a vital role in the toxin’s ability to inhibit the channel, by attracting the peptide to the membrane, increasing its concentration close to the Nav1.7 channel and locking the peptide in the right orientation to allow maximum interaction with the channel.

Although we are years away from the development of a successful treatment, and unlikely to be making any Peter Parkers anytime soon, this study may have uncovered a new generation of pain therapeutics.

* This study was presented at the 60th Annual Meeting of the Biophysical Society in Los Angeles in February 2016.